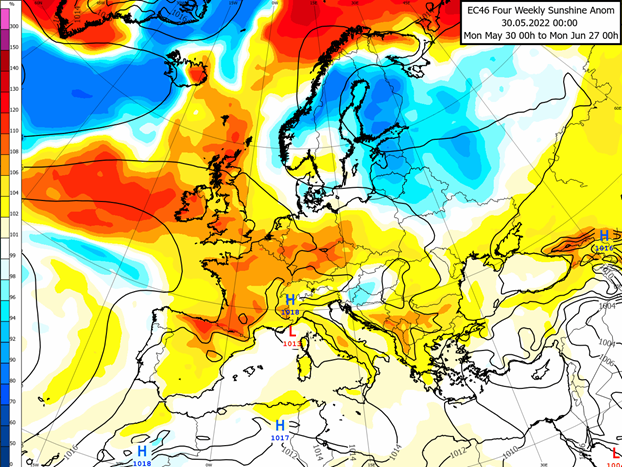 Welcome to June – the first month of meteorological summer.

Our forecast for May turned out to be mostly successful, with warmer temperatures across much of the UK, particularly the South, whilst the windiest and wettest weather was restricted to Scotland and Northern Ireland, as forecast.

More sun, as you would expect with summer months, is the highlight of our June forecast! The map above shows the latest sunshine forecast for June compared to normal. We can see yellow and orange shading across the UK indicating sunnier than usual. This is largely thanks to high pressure overhead which should become increasingly frequent later in the month, after making an appearance later this week. With sunnier weather in the summer also comes warmer days, the continent (especially Spain) will see the warmest anomalies though the UK should be warmer too, shown by yellow shading on the map in our image on the main page.

We begin with some uncertainty over the long bank holiday weekend, though the main picture consists of a high pressure system moving in from the North giving way to generally settled weather. There will be regional variations, however, meaning we won’t all get to enjoy the pleasant weather at the same time. Some small weather features should be able to circulate around the outskirts of the high pressure and as such, we expect some rain and showers on Thursday and Friday in Western regions and Northern Ireland, and Saturday and Sunday for Southern and Central England.

Going into next week, the high pressure retreats Northwards, and the large-scale pattern takes a turn to more unsettled and changeable weather. This is the main signal for the middle of June, which consists of wetter, windier and milder days in between some more settled days. The warmer and sunnier signals in the maps above will be dampened by this mid-June period, which will likely have more of a spring feel to it.

Later in June high pressure is expected to return, this time stretching out from the Atlantic. This will increase the likelihood of blue skies and it will feel especially warm in the sun.

A potential risk scenario for June is that the cooler air over North-Eastern Europe makes its way over to us (blue shading on the main page map). This may happen if the high pressure isn’t as strong and remains over the Atlantic so that’s one thing to keep an eye on, though the main signal remains warm and sunny.

We will update again at the start of July, hopefully after some pleasant sunny days.

Simon is the Senior Meteorologist at SSE and a Fellow Member of the Royal Meteorological Society. Through detailed analysis of the weather and climate, Simon provides valuable information to departments across SSE, including Networks (power distribution), Renewable Energy (wind farms and hydro dams) and Energy Demand Forecasting (how much electricity and gas we need each hour).
Chat on Facebook Messenger